Four of the five Transeuropa Caravans have already arrived home, after an intense and thrilling couple of weeks on the road (the final caravan is hitting the road this autumn.) On the way, they visited cities and towns, met up with activists, NGOs and local authorities, interviewed politicians and ordinary people, supported campaigns and helped spread the word about the rights that come with EU citizenship.

First one to head off was the Visegrad Caravan. Their mission: to speak to migrant workers and the communities that welcome them in Poland, Czechia and Slovakia. Eastern Europe has a reputation for being conservative and culturally homogeneous, and not always open to newcomers – but recent years have brought an influx of immigration and, with it, economic and social changes. 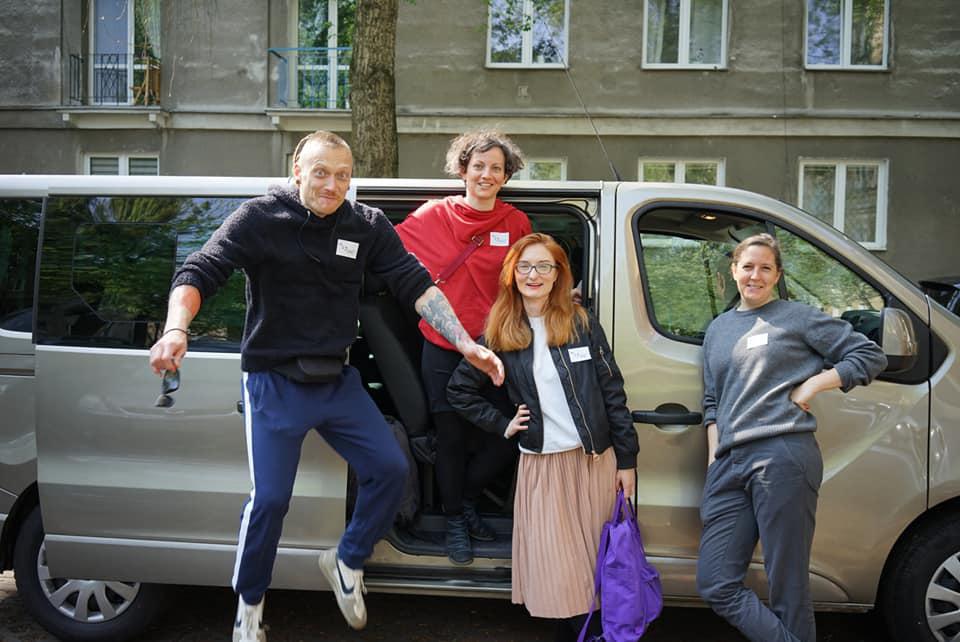 To explore these phenomena, and the realities of living and working as a foreigner in the Visegrad region, they met Ukrainian bus drivers in Wałbrzych and Skoda factory workers in Mlada Boleslav. They sang traditional songs at a picnic with the local government of Wałbrzych and danced at the old bazaar in Prague to remind passers-by about the European elections. They organised dance and theatre workshops for children and adults, using body movement to communicate hopes and dreams about the future. Finally, they interviewed organisations and institutions that help migrants settle in their new chosen homes in Eastern Europe.

The Baltic Caravan set off soon after to explore green Scandinavia with a focus on sustainability and climate change. This year has seen an explosion of climate mobilisations, from the school strikes with Fridays for Future to Extinction Rebellion protests – and the planet is finally becoming a major topic of political debate, as was visible during the recent parliamentary election in Finland. 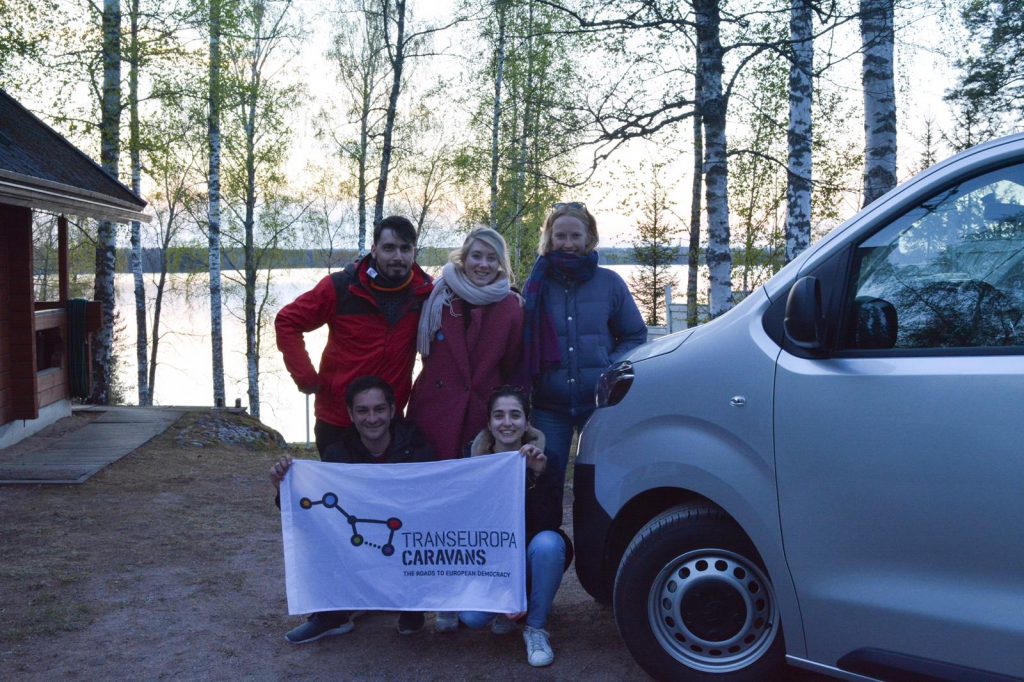 On the way, the team interviewed a number of environmental campaigners and raised awareness of green issues – but soon discovered that they were an excellent starting point to wider conversations about Europe, the upcoming elections and the necessity to work together across borders. From Green Drinks at a local bar to a Wheel of Fortune with quiz questions about the EU and the climate, they found creative ways of engaging with the public on these crucial topics. They also took part in events – from the Hässleholm Europaforum to Europe Day in Turku and a festival hosted at the European Commission office in Helsinki – talking about their trip and mission. Last but not least, they paid a visit to Helsinki’s free, community-run sauna and even bumped into MEP candidates who were DJing at a party in Tallinn.

The Central Eastern Caravan had as its aim engaging with the theme of civic space. The question of freedom of speech and democratic rights, as well as crushing voter apathy, is once again becoming urgent in the age of the rising far right – whether that’s in the form fascist street movements, like seen for example with the growth of Pegida in Germany, or radical right parties entering government, like in Hungary and Austria. 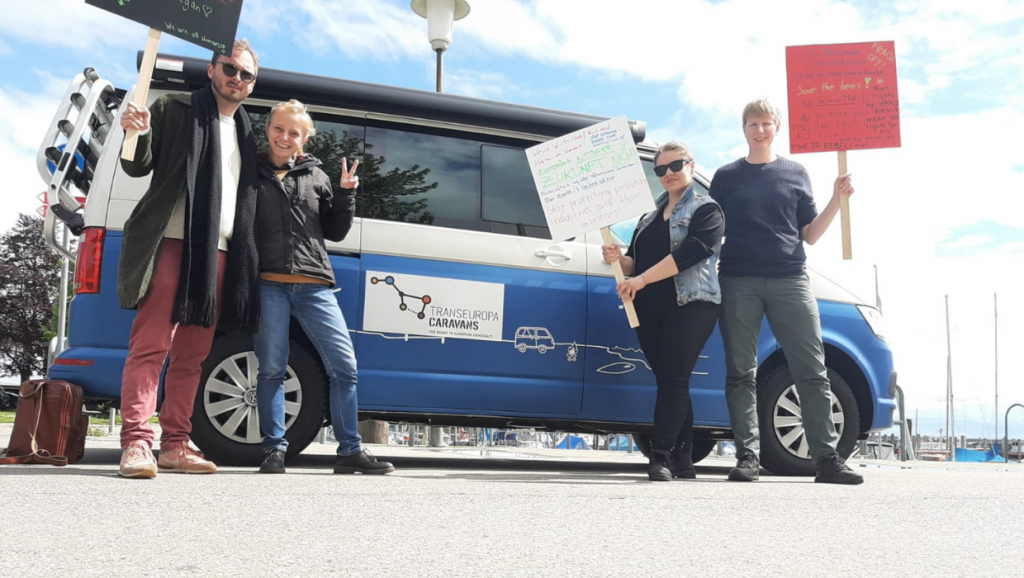 They started their route with a packed room at a screening of Spanish documentary The Silence of Others and discussion about the uses and abuses of history in political debate, organised together with Wake Up Europe festival. In Saxony, considered a far-right stronghold, they gave workshops about mobile citizens’ rights and tried to find out in what way the local community thinks about the EU. In Austria and Hungary, the caravan met with those resisting the right and fighting for democracy, whether that’s on a national or local scale: from Salzburg’s Grannies Against the Right to NGOs in Budapest standing up for civic rights under the authoritarian rule of Viktor Orban. They also commemorated liberation from the Nazis on May 8 by taping antifascist slogans on the pavement – and they reenacted Sophie and Hans Scholl’s act of rebellion by throwing leaflets off a balcony at the Ludwig-Maximilians-Universitat. Such symbolic actions can serve as a reminder about the lessons we should have learned from history: that fascism, hate and attacks on democracy can never be tolerated.

Finally, the Western Caravan route, across Spain, France and Portugal, centred around cities as scenes of innovation, democracy and resistance. The potential of local and urban politics is something Europe is only beginning to rediscover: from the municipalist experiments in Spain, where grassroots movements took power in a number of local governments, to feminist marches seeking to reclaim women’s right to public space; from local initiatives to welcome and support migrants to collectives promoting radical history through actions such as history walks.

The Western caravan team was particularly interested in efforts to make cities and local democracy more inclusive. That’s why they met with groups like O Avó Veio Trabalhar, promoting creativity among elderly people, or the pro-migrant group Humans Before Borders, with whom they made a toolkit for challenging hate speech. In Porto, they presented the Caravans’ vision for a European Feminist Utopia, with equal rights and opportunities for all, and a roadmap to get there. They organised a discussion with feminist collectives in Barcelona, and took part in an LGBTQI history walk, celebrating queer resistance under the Franco regime. They also paid a visit to A Coruña, a city that in 2015 elected the municipalist movement Marea Atlántica to lead its local council, with the promise of reviving and strengthening local democracy. What has the radical council achieved so far? Read the interview here.

What next? We are hoping to turn these experiences into lasting relationships and lessons we can learn from and pass on to others. See you at the Transeuropa Festival in Palermo!

Meanwhile, you can find more photos and videos from the journeys by looking up #TranseuropaCaravans on social media.