I fell deeply in love with Marseille when I first stepped out of the train at Gare de Marseille St. Charles station. Which other city welcomes you with a magnificent view over its limestone coloured buildings and the azure blue of the Mediterranean coastline? Marseille is a city which greets its visitors at once with the sweet smells of the Provence and the salty scent of the sea. Indeed, perhaps most characteristically, Marseille is a city of mixtures, as Johny Pitts beautifully describes it in his soon to be published and highly recommended book Afropean. Marseille is a city where Europe meets with African influences and Arab culture. In other words, Marseille is a splendid place to think about what another Europe might look like.

Marseille’s air of mixture, hybridity and in-betweeness might perhaps best be observed on any given sunny day at Plage des Catalans, a small stretch of sandy beach next to the Palais du Pharo, not far from the city’s famous Vieux Port. Here, one will meet a diversity of locals rather than tourists (Airbnb doesn’t seem to have arrived quite to the same extent here than it has in other cities). During the day, Plage des Catalans is inhabited by women wearing bikinis as well as hidjabs enjoying the sun, queer couples with their kids, old French men reading the newspaper and people of all skin colours, hair styles and body shapes living the Mediterranean life. At night, the beach is populated with groups of youngsters having a drink or watching the sun setting while French-Algerian rap emerges into the mild night air from their smartphones. Perhaps there is a kind of universal quality to the sea that has all kinds of different humans naturally gravitate towards it, coming together at its shores. 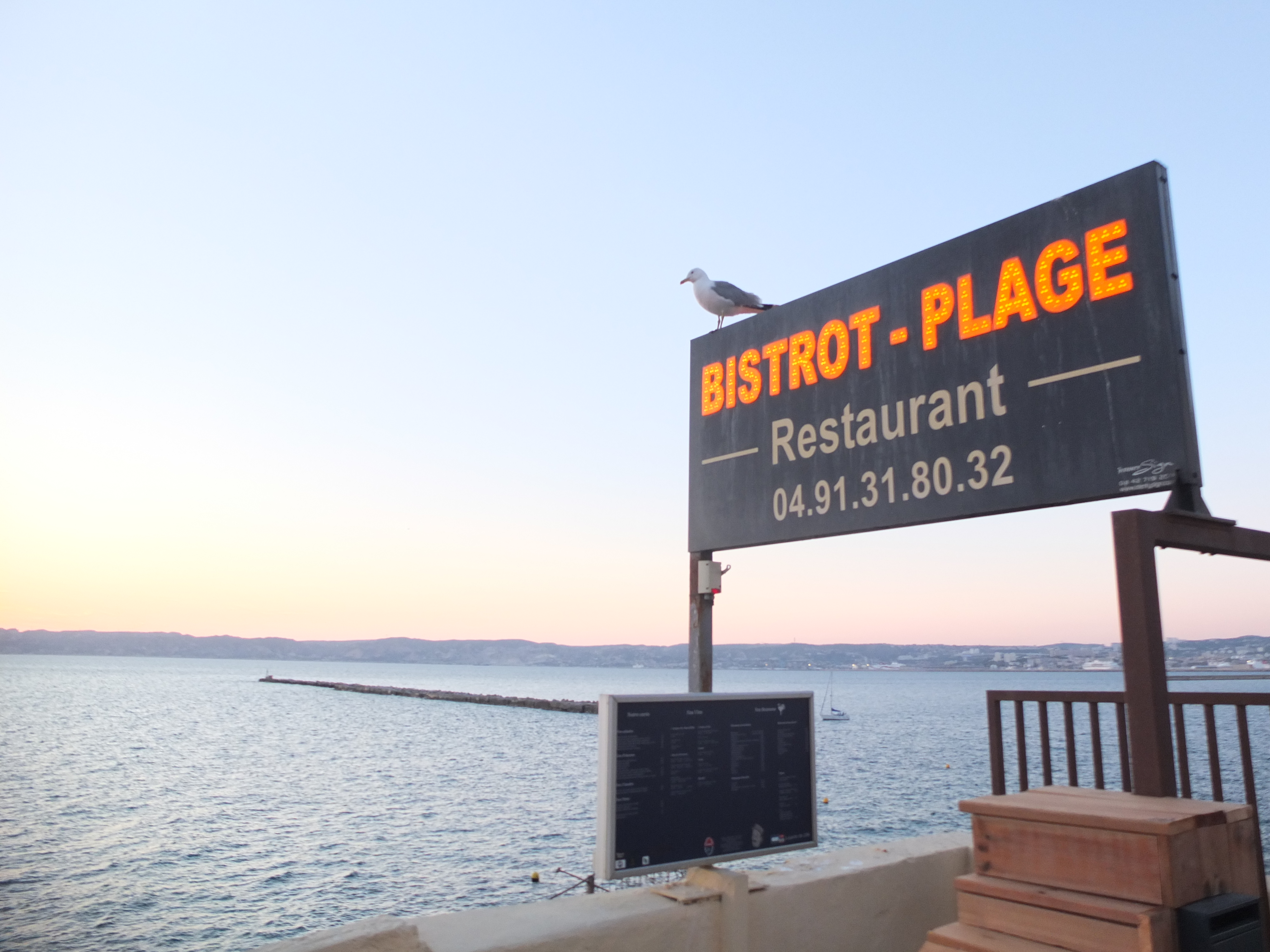 Indeed, like other harbour towns, it is the sea that has had a significant influence on the city’s cultural composition. Marseille is so intrinsically connected to the sea that you will even find boats on strings hanging from the ceiling of bars and churches, including the famous basilica Notre-Dame de la Guarde. In the Museum of European and Mediterranean Civilizations [MUCEM], two permanent exhibitions illustrate how Marseille and other Mediterranean cities have been connected with each other across continents throughout the centuries. In fact, the museum’s impressive architecture itself quite literally flows into and embraces the sea. The exhibitions inhabited within this fluid architecture draw on the work of the French historian Ferninand Braudel, who showed that the history of the Mediterranean is most appropriately told beyond and across the borders of nation states. What Braudel writes about the Mediterranean might well be true for Europe, and for the Transeuropa Caravans project: “The Mediterranean’s only unity is created by the movement of people, the links that they entailed and the routes that they followed.”

This is the beautiful side of Marseille. Once you speak to local activists, however, you discover that things are not all rosy in the city, which has been run by a conservative major since 1995. A recent tragedy that occurred in the traditionally working-class area Noailles, inhabited primarily by people from France’s former colonies, is illustrative of how the city can be a deadly space for those left behind by local authorities. In November 2018, two ramshackle buildings collapsed onto its inhabitants – an incident which killed several and outraged many. The tragedy somewhat reminds of the lethal fire in London’s Grenfell tower – both are catastrophes resulting from years of austerity and governmental neglect which had ignored residents’ concerns about the buildings condition.

This is the ugly face of Marseille. Besides such tragedies taking place in the city’s very center, blatant inequality also exists in the differences between Marseille’s South, with its beautiful sea-view apartments, and the poorer districts and banlieues in the North, which seem forgotten to the extent that the metro doesn’t even go there. Indeed, the tower blocks that pop out of nearby hills like brutalist mushrooms might be more illustrative of people’s everyday realities than Le Corbusier’s famous design dream Unité d’habitation. Marseille is also a city where begging women with silent babies on their arm sit on the ground just a few meters away from a squashed dead rat on the local market square. Marseille is still at least partly characterised by what Walter Benjamin saw when he visited in the 1920s: beggars, prostitutes, hashish dealers and tricksters of all kinds trying to get by.

Then again, as we learned on our visit, Marseille is also a city of resilient inhabitants and active residents, with a vibrant history of local resistance. How, then, do local actors and social centres aim to tackle issues of social inequality? The Western Transeuropa Caravan met with two groups which demonstrate on the local level what another Europe might look like in practise. Marseille En Communs, whom we met at La Friche La Belle De Mai, a cultural complex in an old tobacco factory near the central train station, is a collective of local actors whose aim is to turn Marseille into a “space for everyone”, based on the principles of ecology and the commons. In their view, goods like water, air, food, housing, work and life quality should be regarded as commons which have to be accessible to all people of Marseille. Besides different interventions in public spaces and other actions such as a petition against pollution, the group currently also works on a strategy of how these themes might be addressed in the upcoming local elections, while working with members of the European Parliament as well.

Another set of projects that work towards a more inclusive Marseille, which might equally point to the possibility another Europe, is linked to the association Unis-Cité. The organisation supports local projects run by young people between the age of 16 and 25, including those from less privileged areas such as the cités, which are public housing estates often situated on the periphery of the city. The group we met in Marseille works on a number of themes, including ecology, food waste, disability, migration, citizenship and digital literacy. At a fundraising event, the Caravans team encountered two inspiring young people who develop their own projects. Cyril’s campaign “Gender FreeQ” wants to run workshops in schools which raise awareness and deal with issues of LGBTQ+ rights and gender based violence. Yazid, another young person we met at the event, organises a campaign called “Droit Aux Buts”. The project aims to encourage social mixing of people from the richer South with inhabitants from the poorer North, by organising football and basketball games with mixed teams.

It is such stories of local resistance in a global city which marks a space of intersection between different cultural, social and economic dynamics that make Marseille an exceptionally apt point from which to rethink Europe today. In other words, Marseille has much more to offer than a pretty facade. Many more stories could be told, and so I am certain that I will obey the demand of the night-receptionist in my hotel, a retired English teacher with Algerian roots, who taught me about Marseille and who speaks not only English and French, but also Arabic, Romanian, Italian and Spanish. He made me promise to come back sooner rather than later. As the jazz musician Ahmad Jamal put it in his hymn to the city, there is much to be explored: “Marseille, your many monuments abound / Mysteries, beyond the human mind / Marseille, I never, ever, can regret / Blessed be, the moment that we met”.

Antje Scharenberg is a PhD student at Goldsmiths, University of London. Her ethnographic research investigates forms of transnational activism which seek to redo Europe from bottom-up, and works in close collaboration with civil society actors such as European Alternatives. She also contributes to other organisations including Another Europe Is Possible in the UK. She joined the team of the Central Eastern Route in Transeuropa Caravans through their trip along Austria and Germany.