The woman with the white rose

Antje Scharenberg is a PhD student at Goldsmiths, University of London. Her ethnographic research investigates forms of transnational activism which seek to redo Europe from bottom-up, and works in close collaboration with civil society actors such as European Alternatives. She also contributes to other organisations including Another Europe Is Possible in the UK. She joined the team of the Central Eastern Route in Transeuropa Caravans through their trip along Austria and Germany.

“What are you doing there?” It must have been our taking pictures with the memorial and the load of material we carried that grabbed her attention. The woman who approached us as we were taking photos outside the Ludwig-Maximilian-University in Munich was dressed almost entirely in white – white hat, white jacket, white pants, carrying a white rose in her hand.

We told her what we had been up to. In the morning, we – that is, the team of Transeuropa Caravans’ Central Eastern European Route, now on the fourth day of our trip – had staged an intervention on Munich’s Marienplatz as part of the official Europe Day celebrations. Except, our own action wasn’t quite so official or celebratory. We wanted to spread the message that Europe must not only be celebrated, but that it also has to radically change. Thus, in white, black and red colours and stretching over several meters, we taped the words “Another Europe is Possible” in the middle of the square. The claim was surrounded by stars made of red and white barrier tape, referring to the fact that Europe was still a major building site, and accompanied by hashtags referring to movements that are working to build this other Europe every day: in rebel cities, at Fridays for Future, through Extinction Rebellion and by people who fight to open Europe’s harbours and build bridges across the Mediterranean. Albeit provocative and rather impactful, it wasn’t this action, however, that should become the most memorable aspect of Europe Day. It was the encounter with the woman who was carrying the white rose.

Her name was Marie Solange, she told us in front of the University. We had come here after our action on Marienplatz, we explained to her, to pay tribute to Hans and Sophie Scholl, the anti-Nazi fighters of the White Rose, a resistance group fighting against Hitler and the Nazis in the 1940s. 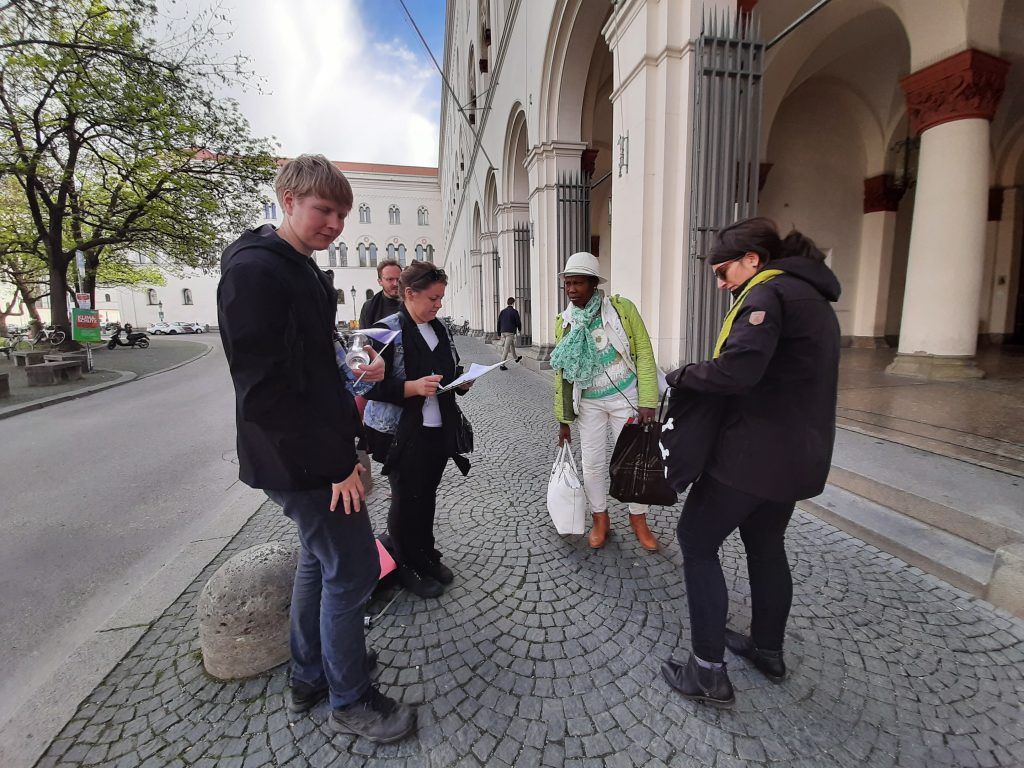 Her name was Marie Solange, she told us in front of the University. We had come here after our action on Marienplatz, we explained to her, to pay tribute to Hans and Sophie Scholl, the anti-Nazi fighters of the White Rose, a resistance group fighting against Hitler and the Nazis in the 1940s. The Scholls and others had famously distributed a series of leaflets in which they called on the population to resist against the brutal and inhumane regime of National Socialism. One of their leaflets they also called for a “new Europe” based on freedom of speech, freedom of religion, and the protection of citizens from violent states. Following an action at Ludwig-Maximilian-University, where Sophie Scholl had famously dropped some of their leaflets from the magnificent atrium balcony, they were eventually arrested by the Gestapo, and subsequently sentenced to death by execution. We had come to the University, we told Marie Solange, to re-enact the leaflet drop with our own material in solidarity with the White Rose and contemporary movements fighting fascism. Our flyers read “If Europe Is a Fortress We Are All In Prison”. We distributed them as a symbolic act of resistance against Europe’s failed refugee politics, which keep causing human suffering and play into the hands of fascists all across the continent. All of these actions, we told the woman carrying the white rose, were part of a bigger project of connecting contemporary struggles beyond borders.

“Well”, said Marie Solange, “I was just about to deliver this rose at the memorial” and since we were so interested in the heritage of Sophie and Hans Scholl, why didn’t we come with her, she asked. As it turned out, Marie Solange had been taking care of the Scholl’s memorial at Ludwig-Maximilian-University for several years. Having just been on our way out when we met her, we now found ourselves walking back into the University’s impressive bright atrium where a bronze relief reminds of the White Rose resistance movement. This was where she went on to tell us her incredible story. In front of the artwork stood a glass vase with white roses in it. This, Marie Solange told us, had not always been the case. Growing up in Togo, West Africa, she had first heard about the Scholl’s story in the 1980s when she came across it on television. “What kind of country is this”, she thought, “which kills its own children”? Following a time of political unrest in Togo and facing personal threats, Marie Solange explained, she eventually found herself seeking refuge in this very country. Even though her sister already lived in Germany and had just had a baby, she wouldn’t stay longer than a year, she thought at the time. 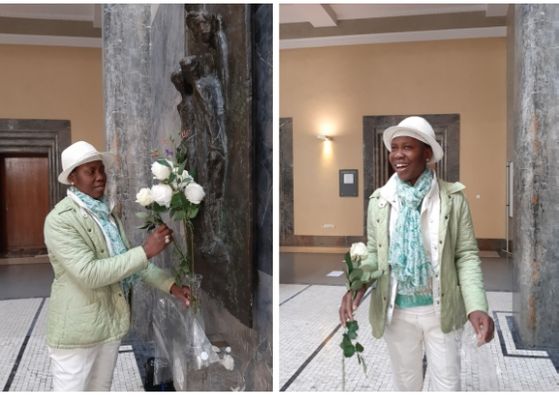 Some turbulent few years later, after learning to speak German, working in elderly care for some time and combating illness, Marie Solange eventually went back to build on her law degree and enrolled at Ludwig-Maximilian-University where she subsequently studied for seven years. Here, she once again came across the Scholl’s story and started to investigate it in more detail. What she found revealed an incredible personal connection. As it turned out, the 9th of May, the day we had re-enacted the famous leaflet drop at the University, was not only Europe Day. It was also Sophie Scholl’s birthday – as well as the birthday of Marie Solange. It was this surprising coincidence along with her love for flowers and the fact that her own mother, too, was called Rosa, which sparked an active engagement with the preservation of the Scholl’s heritage that would last for more than a decade. Marie Solange has actively fought for the remembrance of Sophie and Hans Scholl in Munich in a number of ways ever since.

Marie Solange’s engagement was also a reminder that everyday acts of resistance like hers take place all across Europe every single day.

What was so inspiring to us about Marie Solange’s story was not only her powerful personal connection to the Scholl’s heritage, or that we happened to meet her on her very own – and Sophie Scholl’s – birthday. Marie Solange’s engagement was also a reminder that everyday acts of resistance like hers take place all across Europe every single day. These acts don’t always have to be as big as our several meters-wide “Another Europe is Possible” installation on Munich’s Marienplatz. They don’t even have to be formally attached to a political group or organization. Their greatness can lie in their persistence – replacing a white rose in honour of anti-fascist resistance week after week after week.

Marie Solange’s story made us humble and inspired us to do more at the same time. It was a reminder that it can be the smaller acts of resistance that are often less visible in the context of the European Parliament elections and that slip through the net of mainstream media headlines, which can be the most powerful. Seemingly small things like a white rose persistently replaced every week – so that we shall never forget, never again.