Interview with Claudia Delso from the radical Council of A Coruña

While many have heard of the municipalist movement changing the local way of doing politics in big cities like Barcelona or Madrid, not that many have heard of a similar case in A Coruña, a middle-sized city in Galicia, in the North West of Spain. The 15-M movement, which strongly mobilised against austerity and for more democratic politics throughout Spain in 2011, marked the start and set the right inspiration for the launch of Marea Atlántica, a grassroots movement and now also a political party in power in A Coruña. In 2015, they gathered the necessary strength and motivation to run in the municipal elections of A Coruña and, to the surprise of many, they won, and even achieved the Mayorship.

Four years later, Marea Atlántica have proven that a more participative, feminist  and sustainable approach to local politics is possible, and now they are a few days away from hearing what the citizens of A Coruña have to say about it with their vote in the upcoming local elections.

The Western Caravan paid them a visit on one of their campaign events on a sunny afternoon, and had the chance to speak with one of Marea Atlántica’s faces, Claudia Delso, Councillor for Participation and Citizen Innovation in the City Council of A Coruña.

Adriana Díaz Martín-Zamorano, Communications Officer for Western Caravan: Your party Marea Atlántica started as a grassroots organisation and now leads the local government in A Coruña. Could you tell us more about how the party was founded and how did it all start?

Claudia Delso: In 2011 in Spain, there was a strong movement of occupying town squares to demand more democratic politics, the 15-M movement. After that, there was a big discussion all over the country and also in our city, A Coruña, involving people from the social movement who had an active political life about what to do about it and how to start taking up responsibilities from an institutional perspective.

So based on this conversation that started in A Coruña, Barcelona, Madrid and then also spread to other cities, we had the idea of creating a solid grassroots movement. Then, we started to go around the neighbourhoods in the city to share this question with the citizens to see if we would have the possibility and energy enough to run in the next local elections. Those were very motivating times, because we realised that there was a strong willingness and wish in the city from people from different social movements and backgrounds to join forces, to do something together and to really try to run in the next elections. Then, we also discussed with politicians from the left, asking them to leave the restrained party structure of the traditional parties in Spain, and to really try to work together in the same space.

With all this support, we created Marea Atlántica, so we held open primacies and decided to run in the 2015 municipal elections in A Coruña – and the great thing is that we won. Even better, movements like ours not only won in A Coruña and started leading the government of the city, but also in different cities around Spain, like Barcelona, Madrid, Zaragoza or Valencia. That was a very inspiring movement for Europe, in the sense that we were able to create a domino effect.

We then also started creating this dynamic of working together with different cities to be able to build a political network, but also to be able to exchange knowledge.

So that’s who we are, we are normal people coming from social movements, from the streets, taking responsibilities for our cities by becoming part of the institutions while preserving our way of doing politics.

We emphasised this a lot in our 2015 campaign and we also keep on saying it today: we need to open doors and windows in the public administration and to make sure that the institutions work for the people, and that they are fit for the current times.

Many grassroots movements that end up turning into political parties running in elections, are often criticised. What was the turning point for your movement and why?

We decided to turn into a political party when we realised and felt that it was really possible, after several meetings with diverse citizens in different neighbourhoods of A Coruña. In fact, that had been a historical debate within the leftist movements in the autonomous communities of Spain. Then, the 15-M Movement showed that there was also a need to change politics and to make politicians work for the people, that the change from within the system was as necessary as the change from outside the system.

I think that now, after the first years in government, not only in A Coruña but also in the other cities in Spain, the hypothesis we had back in 2015 has turned out to be true, because we have cases today of policies that change and transform the city for the good and for the people. As an example, we have opened a lot of participatory and innovative processes, where people participate in the design and urban planning of the city, or we have put forward a renta social municipal, which is an economic benefit provided by the City Hall aiming to alleviate temporary situations of need and guarantee minimum subsistence resources for the inhabitants of A Coruña. These measures are also a way to deepen democratic processes. 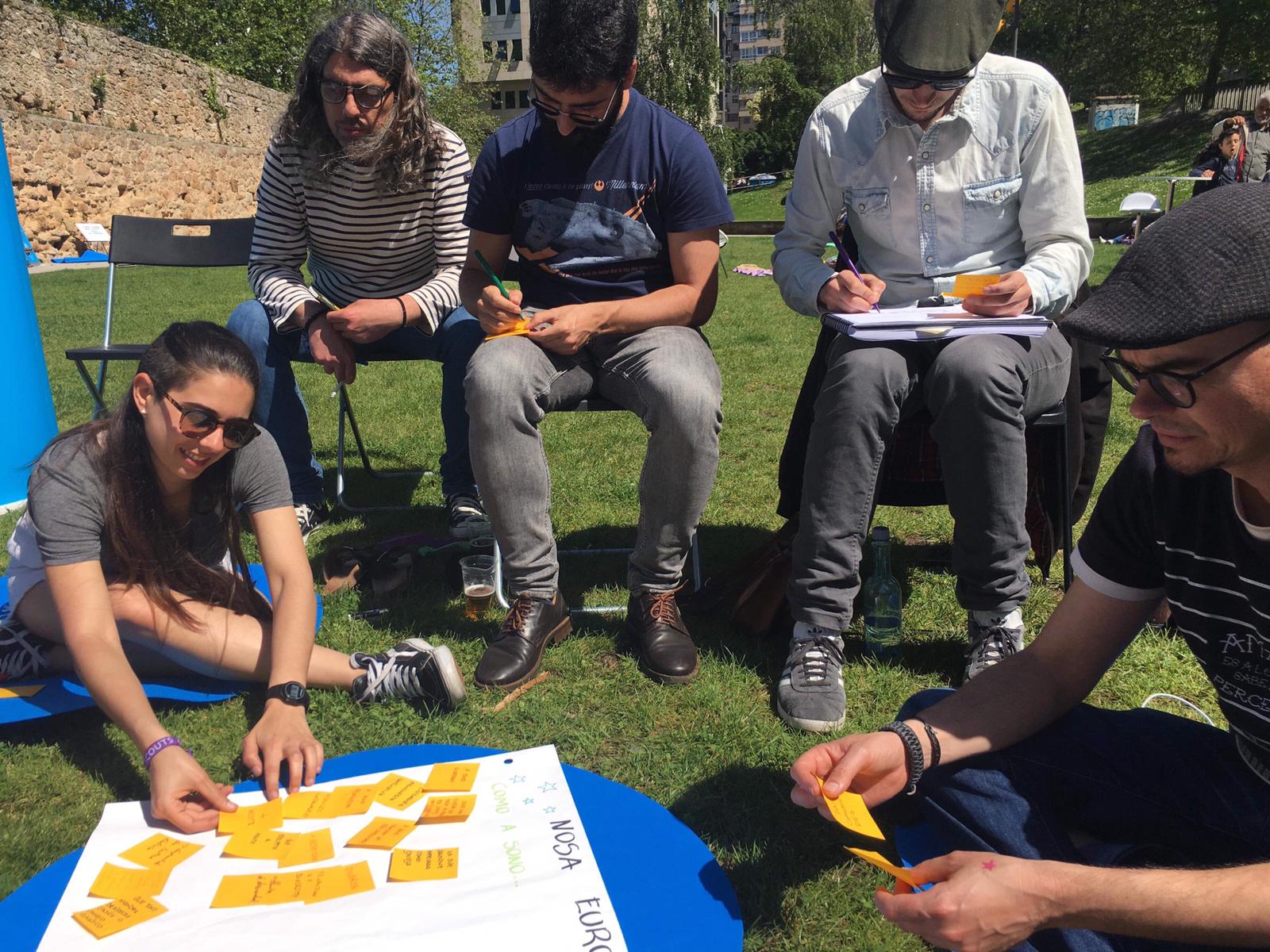 Your next goal is the upcoming local elections on 26 May. What are the main proposals of Marea Atlántica for these elections?

Our main objective is to keep the power in the Council and the government because once you are inside, you realise that the first years are a very short time to lead political transformation.

I think our seats in the local government have contributed to a better model of city, more sustainable, more feminist and with a higher level of participation, but we need to remain in power to have more time to turn this transformation into something to stay.

As Xulio Ferreiro, our party leader and Mayor of A Coruña, said before, “this is a process that is going to take decades.” After all, this is a big fight against neoliberalism, that is why we need to aim for the long-term and to stay inside the institution to be able to keep on doing politics for the people.

We are now in the middle of our campaign for the next local elections and the next two weeks will be very intense for us. Our goal is to defend and protect what we were able to achieve with joy, even if sometimes it was and still is difficult because both the opposition and the media are very hard on us. We still often get criticised because some people think that “we cannot be where we are, that normal people shouldn’t be in power.” Instead, we want to prove them wrong once again by showing that we still have a lot of energy and the wish to continue working on better policies for the city.

What is happening in Spain now at a local political level is very inspiring. Are you also part of the Fearless Cities movement, this global municipalist movement working to build global networks of solidarity and hope from the bottom up?

We are indeed part of the Fearless Cities movement. We are having a lot of meetings with other cities and exchanging knowledge on the experiences we have had in recent years. This network is very much needed because we can work together and not feel alone. It is incredible to see what we are doing together throughout Europe, in each place with its singularities; contexts are different and sometimes complicated but I still firmly believe that we are doing what is right to do.

Speaking of Europe: the next European elections are also around the corner, alongside the municipal elections in Spain. What are your thoughts as a political party on what the future of Europe should be like?

Even if we are a local project, our vision is also on a larger scale and therefore we also consider Europe in our work. We believe that it is very important to have progressive politics in Europe and to stop the far-right parties that are becoming stronger and showing more of their power.

But at the same time, I also think it is still important to defend the power of cities, as the administration that’s closest to people. We are also struggling with many of the challenges that Europe is fighting against, so we need more resources and more powers on a local level to be able to take more action.

It is important to have a strong European Union, but it is also important that the EU further recognises and defends the power of local institutions.

The Western Caravan travelled through Spain, France and Portugal, exploring the concept of Cities of Solidarity. Find more about their route on the hashtags #TranseuropaCaravans #WesternRoute.