I’d say there’s two aspects of my personal route that are relevant the context of this project. One of them is the fact that my parents were active with the labour union Solidarność in Poland in the 1980s. My father worked in a dockyard at that time. Later, in 1990, we moved to Germany, to the Rhineland. My parents made a real effort to try and integrate themselves into German society and were arguably quite successful in doing so. They both started out working for the same company, which still employs them today. After working with this company for some years, my father had an accident falling from a roof. He had to get an artificial elbow implant after this and was on sick leave for one year and a half. In the meantime, my mother continued to work for the company, doing an office job. When my father came back to his workplace after his sick leave, he realised that the “politics of numbers” in the company had gotten worse. This meant that people who were not fully fit for action – for example, as in my father’s case, because they couldn’t lift certain things any more – were bullied by the employer. My father tried to deal with this for about one and a half years, during which he experienced different kinds of harassment. In any case, this kind of culture didn’t just affect him, others experienced it too. Eventually, my father ended up suffering from a heart attack. One morning, so my mother tells the story, when arriving on the company grounds, she saw an ambulance car and thought, “they must be here to get my husband”. It was all quite bizarre. I remember exactly, it was a day a bit like today, the clouds were hanging quite low over Cologne, it was pretty grey. She called me, telling me that my father had just had a heart attack, but that it was probably all going to be fine.

“Why don’t you go to hospital”, she said, “and I’ll go to the boss to tell him that we’ll finally set up a labour union in this company”.

This was an important step for her, my mum is quite a tough woman. They ended up setting up the union in a workplace with 300 people, mobilizing a lot of them and creating personal connections. In the meantime, my dad did therapy to deal with all of this, but then there was also the union. At some point after his personal situation had improved a lot, I asked him which of the two had been more important, the union or the therapy. He said that the therapy was important, of course, but his recovery wouldn’t have worked without the union. Meanwhile, the union celebrated quite a few successes really quickly, despite it all being very exhausting. I supported my parents through all of this. When I was younger, I often argued with them, because I always had the feeling that they kept telling me about how active they used to be back in Poland, but then in Germany there was none of that. However, after my dad’s heart attack, all of that suddenly reappeared. So I realized how important it was to support them, but also to reflect on my own activism, especially in relation to art and theatre. I somehow understood that this all needs to become more practical in some sense. This was four years ago. 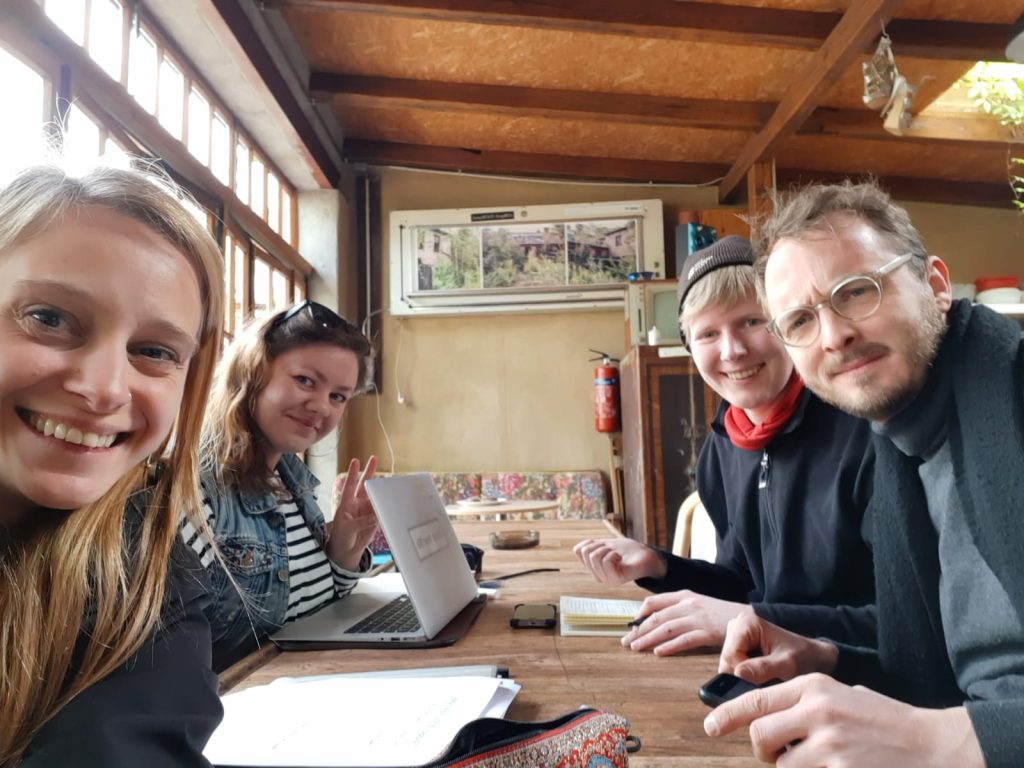 The other route, which intersects with this story in the context of the Transeuropa Caravans, is a project I founded called the “Schule der Politischen Hoffnung” [School of political hope]. When we started this project with a few friends – activists, artists, lawyers, designers, even one doctor, who is also a theatre practitioner, is part of it – it became really clear that we wanted to create particular kinds of spaces. The spaces we had in mind – events, projects, actions – were to combine discourse with action. This derived out of the repeated experience of going to political events, which are tend to be primarily about talking. Of course this can be nice, but more often than not I found myself asking “what is the next step”? Most of the time there was merely a moment of talking or creating awareness. This, I believe, is generally a problem of the left. The left does a lot of awareness raising, but at the same time it often fails to offer a form, or a call to action for what actually needs to be done. This is what we wanted to do, and it has been working quite well in the last two years already, given the limited amount of resources we have.

What was one of your highlights on the Central Eastern route thus far?

I think the action on Marienplatz in Munich was definitely a highlight. What we did was to tape a message on the ground of the square, right in the middle where everyone’s paths cross. Here, we used tape to create the words “Another Europe Is Possible”. Then we used barrier tape to draw stars around this message to illustrate the notion that Europe is under re-construction, the fact that it is still very much a building site. We also added hashtags like FridaysforFuture, Xtinction Rebellion, Rebel Cities, or End Fortress Europe – movements which are the forerunners of a new kind of Europe, another Europe that is better, more social, more sustainable, more just, more democratic and so on. For one, this was a lot of fun. Additionally, it also provided opportunities for people to interact with this kind of message relatively easily: they were looking at it, posted a photo of the action on Instagram or Twitter, or engaged in a conversation with us or each other on these topics. It was also nice that we had Beate Lippmann there, a local candidate running for Democracy in Europe, who supported the action.

I particularly like this action, because of the taping – a kind of art activism – which seems to be a useful tool. There is a lot to learn from this experience because it holds the potential of doing easy but useful interventions. What’s nice about the taping as a format is of course that it allows you not only to say something but to actually do something. The other thing I liked was that it felt like an appropriate intervention to put an alternative kind of statement directly next to the main stage where the official celebration ceremony was taking place. There was even a moment when we were approached by the organizers of the official part of the event, who came to check if our action was legal and had been registered (which we deliberately haven’t done, although we did get someone to remove the material after the event finished), and whether our action was pro-European. This was when I realised that we were creating a kind of disruption, and this, I think, was a good thing. 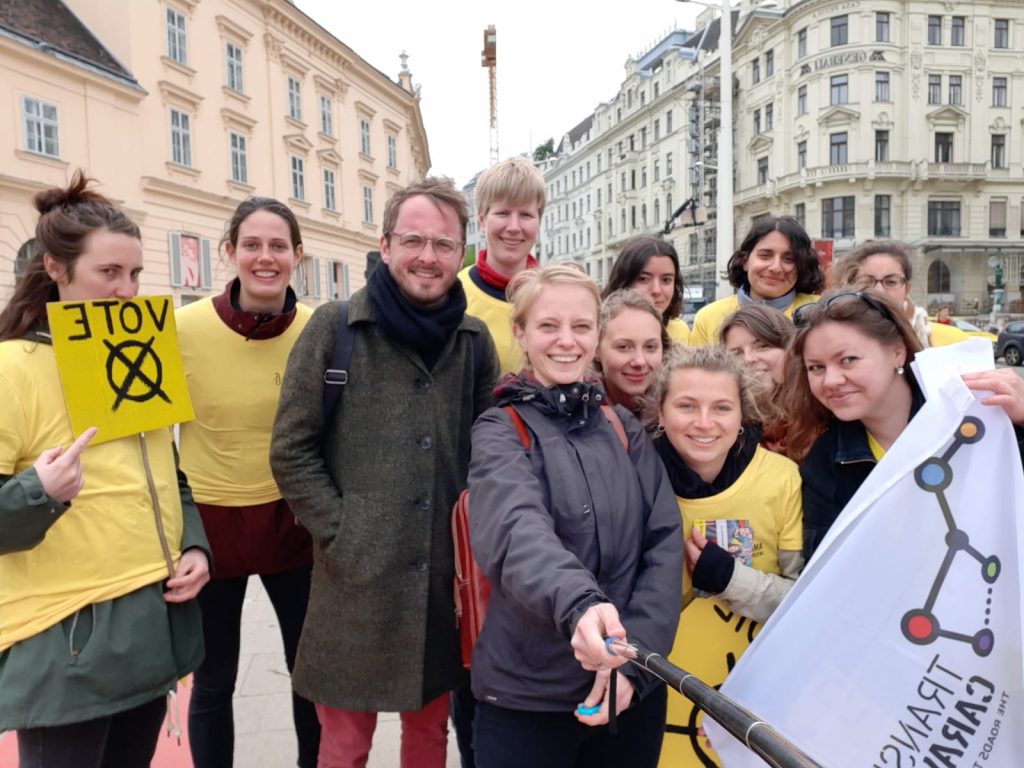 The taping action is something I will definitely do again. It was born out of an impulse I had before the journey in the context of thinking about civic spaces under pressure. I think it could be a really important tool. The other thing I will take with me are all the personal conversations with people, and there’s more to come of course. The meeting with Kurt Fischer, the major of Lustenau in Austria for the conservative Christian-democratic party ÖVP, was particularly interesting in regard to learning more about how liberals and conservatives are dealing with and responding to the rise of the far-right. In the context of the upcoming European Parliament elections it seems that most parties merely want to survive these elections without a serious debate – either because they think they will lose out against the far-right, or because they don’t want to talk about exactly how things might change.

At the same time, there also seems to be a big desire for a meaningful, big, visionary European project for the future, in which people come together to rebuild Europe from the bottom up.

Other than that, what I’m taking with me is a set of questions around the problem how to do activism better. This is quite interesting to me and something to work with. On a more personal level, it has been fascinating to see what you can do with five people who hardly know each other and how you can create actions very quickly without too much tension. In our team, we were lucky to have a constellation of people with backgrounds, skills and temperaments which harmonized quite well. But one of the key questions for community organizing that remains for me is how people can come together and take responsibility for taking action. Another question is what it might mean exactly to connect struggles and build bridges across borders, that is, how exactly do you run a successful transnational project? It is a new set of questions, then, that I’m taking with me from this experience.