On the second to last day of travel we arrived in Padua, situated in the Veneto region (centre-north of italy) and participated in the “Welcome Festival – Arcella Edition”: a cultural initiative organised by different associations active in the city such as Xena – Centro Scambio Dinamiche Interculturali and Gasparorto. The festival offers in the Arcella neighborhood of Padua two weeks of events, workshops, talks and interactive activities related to the themes of hospitality and community. The events are carried out in collaboration with migrants,refugees, European volunteers of the EVS Welcome project and local volunteers. They are moments designed to raise awareness and information on the different aspects of the migration issue, open spaces to contain a dialogue on identity and intercultural encounter.

In this context we, as the Mediterranean Route, participated in organising an Urban Walk or City Walk. This facilitation technique represents a tool for informal exploration, a fun moment of infield exchange and dialogue that, in the presence of one or more expert guides (anthropologists, town planners, locals as “privileged witnesses”, etc..), allows people to reflect on significant places in a neighbourhood or territory and around meaningful issues that interest the community. 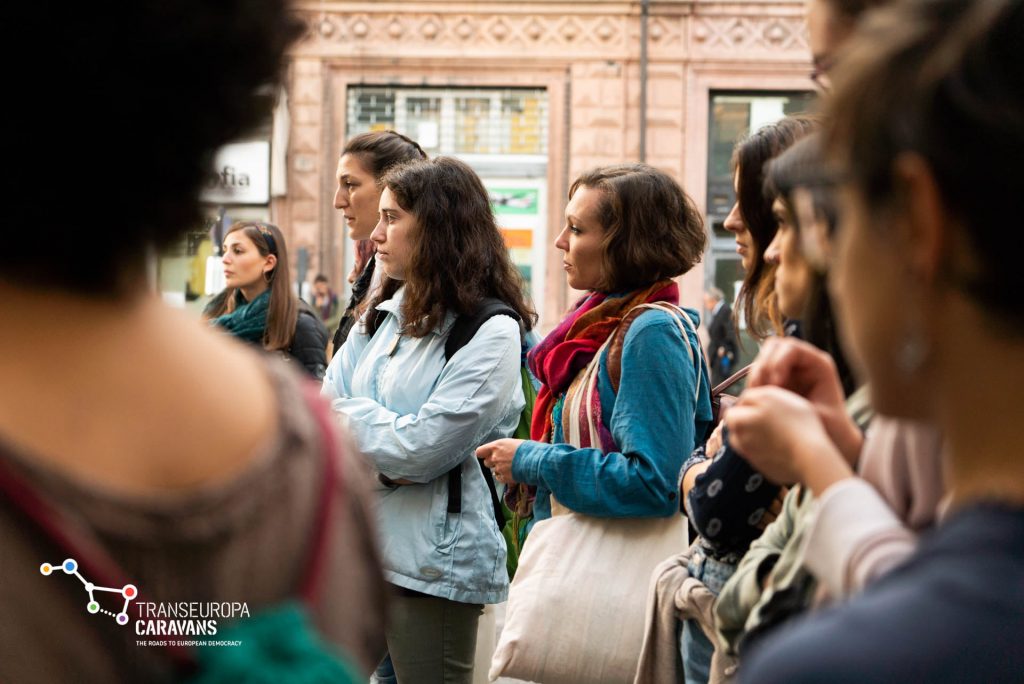 In our version, the “expert guides” were the participants themselves, who were guiding each other through an exploration of their beliefs, experiences and challenges that they have faced on the topic of “mobility, migration and borders”. The added value of the City Walk (from other meaningful dialogue techniques) is that it integrates the different points of view with an embodied experience of the addressed topic, in this case, overcoming borders. The participants to the event were around 20 people and were encouraged to engage in meaningful conversations, while moving through symbolic areas of Padova.

We started our walk in Piazza Gasparotto, a hidden square in the city near the train station, that for years has been abandoned and that now is being revitalized through the different projects of Piazza Gasparotto LAB+. After an introduction of the Transeuropa Caravans’ project, our journey, the partnerships and resources that we’ve built along the way, we asked the participants to pair with someone they didn’t know and, while walking, interview each other on the topic of “Who are you and why are you here today?”. This question introduced the topic of encounter, upon which participants were asked to reflect started looking at their own personal experience.

The next stop, connected with the topic, was the railway station, chosen for two reasons: as every other station in fact, it embodies the meaning of encountering differences, of getting in touch with the new or rejoicing the already known and on the other side, its marks an artificial border in the city of Padova, dividing the rich center on one side, from the most populated neighborhood of Padova – the Arcella neighborhood – that is also the one with the highest percentage of foreigner resident citizens.

The Arcella neighborhood has suffered for years of the stigma due to its multiethnic and multicultural component and this is why we wanted to cross the border of the station and to move into this neighborhood, to symbolically overcome this invisible borders in the city.

At the train station, we asked the participants to share with each other in (new) pairs a moment in which they felt that they had overcome a border (be it visible or invisible).

In the harvesting part of this exercise, many interesting points of view emerged, such as:

not only the hardship of moving to a new country and adapting to a new environment, but also coming back in your home country after months or years abroad, “feeling like a foreigner at home”. Other concepts that rose from the exchange ranged from overcoming personal borders such as challenging oneself to step out of their comfort zones to the barriers represented by new languages or the fear and challenges related to papers and documents, so overcoming bureaucratic borders to be in a country.

These insights allowed us to share with the participants the resources that we gathered on the Transeuropa Caravans project, before asking them the final question:

What do you earn from an encounter? Share a story of an encounter that left a trace in your life / a change, a reflection. This last round of reflection took place in the Arcella neighborhood, since we had crossed the “train station border” while exchanging experiences about overcoming borders. The particular area we ended the tour in was the “Piazzetta Buonarroti”, an unofficial square not indicated in the maps, but that was created informally through the meetings and daily exchanges between residents of the place. It was the perfect symbol to frame how new encounters shape our lives and the places we live in. 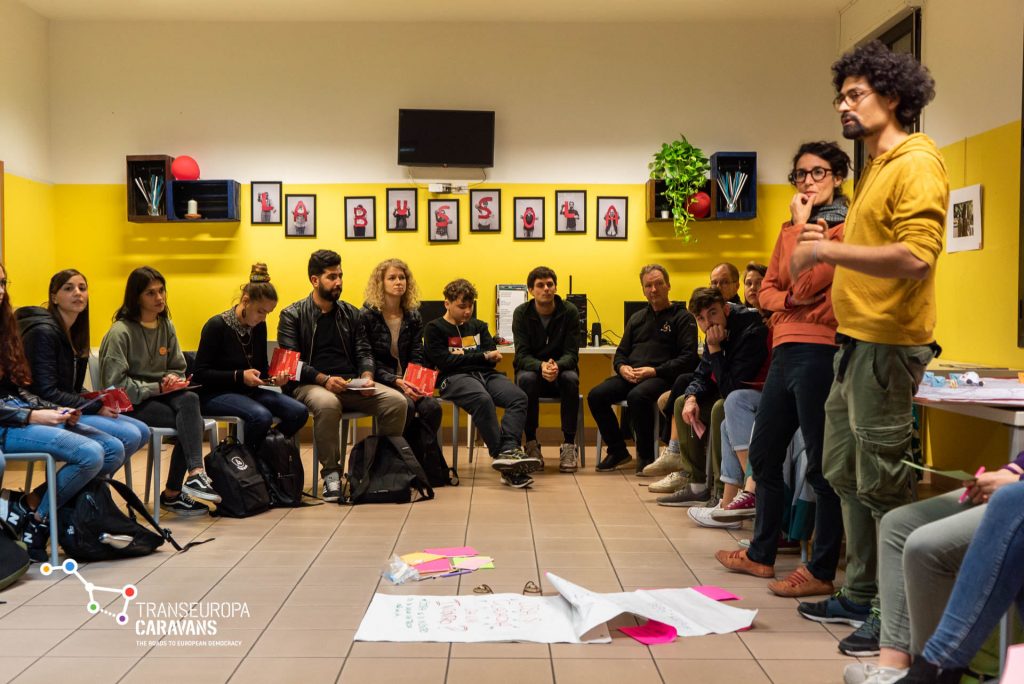