I was born in the North of Italy, where I lived for about 20 years. The town I come from is very small and there is nothing really happening there – no cultural activities, no activism. So I always had the feeling that at a certain point I would move abroad, I was so convinced that Italy was not the place for me. As soon as I had the opportunity, when I was 23 and graduated from my Bachelor in Arabic in Venice, I joined a programme called Erasmus Mundus. It was very interesting because every three months we would change the university. As a result, I lived in Barcelona for three months, I lived in Venice for three months, I lived in Tunisia, and in Montpellier. It was very stimulating because I met people from all over the world. We were a class of 32 people from Canada, Lebanon, Germany, Spain, Italy, Tunisia, Egypt, it was very cool.

During this Masters, when I lived in Tunisia, I did a small research on the use of literature in social movements and I came to know a lot of activists there. I did some interviews with political poets, who were mainly activists. This really made me reflect a lot, because these people were actually fighting for things that we take for granted, and it’s really interesting to see how they do it. I was there during Ramadan in 2017, when there was this incident of three guys getting a fee for eating a sandwich in a park. The activists I was in contact with organised a protest against it, because there is this law in Tunisia which is about protecting religion, but there is a sense of ambiguity about what that actually means. It can be applied by the judge or by the police in a very free way. These people got a fee for eating a sandwich in public because it was Ramadan. But actually, this is not forbidden by the law. In response, this huge movement called “I don’t fast” emerged, which organised a huge protest on one of the main roads of Tunis – all for something we take for granted.

At the same time, the moment I started living abroad, I really realised that I wanted to live in Italy. When I finished my studies in Montpellier I was considering doing an internship either in Budapest, in Paris or in Palermo. And although Paris sounded amazing, too, something was telling me that I had to go to Palermo. It was the best choice I made in my life. Today, when I arrive in Palermo and I see the sea, I almost start crying of joy, I don’t know why, it really feels like home. You have the dimension of the neighbourhood, because your neighbours really care about you, sometimes even too much. People live in the street, literally everything happens in the street. And people really care about it. In my street, for instance, there is this guy, who did something amazing. We have a problem with waste in the city and there was a corner where people would just leave their garbage. So the guy just planted some flowers in this corner. The result was that no one throws their garbage there anymore and we have very nice and beautiful plants. Of course he didn’t ask for permission. It’s a bit anarchist, Palermo, people just take the public space, they don’t ask anyone.

That’s what I love about Palermo – people who stay, stay to make the city a place that is a better place for them and there is a very strong sense of community that I didn’t find in my city in the North.

That’s what I love about Palermo – people who stay, stay to make the city a place that is a better place for them and there is a very strong sense of community that I didn’t find in my city in the North. Since I live there, I really feel part of something, also in terms of the organisation and the people I work with: we felt that it was our duty to change something, to change reality if we don’t like it. In Palermo, I learned that this was possible – people just make things work and find their own opportunities. This was a great lesson for me, and also a great stimulus to do something, because my country is not going into the direction I want it to go, so it’s my duty as a citizen to do something for it. It’s nice when you are able to work together with other and do something to change things. It was through my work in Palermo, that I also got to know European Alternatives and heard about the Caravans project. When I saw the call, I thought this is a really cool opportunity to enlarge this network of people who are not happy with how the things are going. It’s nice to know that there are other people in other parts of the world who are also fighting for the same things you are fighting for, so this is why I decided to join.

What was one of your highlights on the Western route thus far?

The activity I liked the best was when we met with the Institute of Catalan Women, a network of feminist organizations. It was amazing to just listen and learn about their best practices. One of the women was telling us about something they do, which I find purely genius: an observatory for the violation of sexual and reproductive rights. This observatory is online and people can make all sorts of claims. This can be about a personal issue, it can be anonymous, it can be collective, and they provide support. For instance, if a woman felt she couldn’t get an abortion, she can make a claim and then access psychological and legal support. They also do collective actions, for instance they campaigned against the government of Catalonia which was giving funds to pro-life associations. They managed to completely block the website until the Catalan government published a document that stated they were not going to do it anymore. It was really nice to see how these people are connected and how they really work towards the same aims with 400 organisations in this network. Finally, they also work on a transnational level. They also did this other campaign which was about seeing the world through a feminist lens in which they distributed sunglasses providing a link to their claims and demands. However, I think what’s most interesting perhaps is how they try to advocate and lobby, to really bring these feminist issues to politics, also in the context of the European elections. I really think this could work in Italy, too. 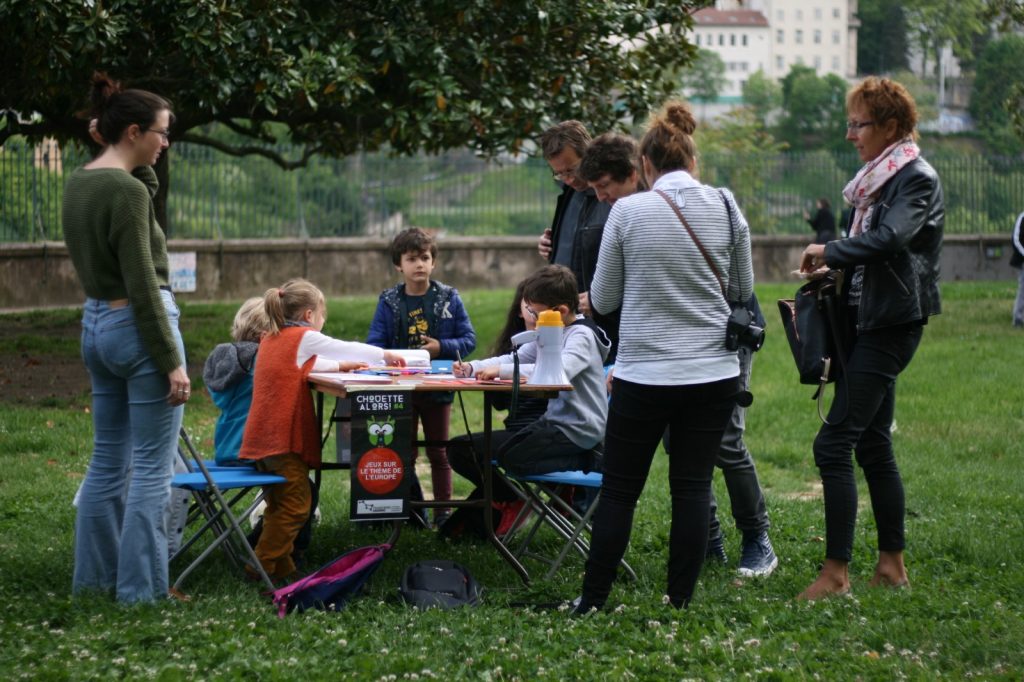 What I bring with me for sure is all the exchanges, all the conversations and all the people we met. It was amazing to see these different people from different backgrounds doing different things – from the gardening project in Paris, to the grannies doing crafts in Lisbon, to the feminist activists in Barcelona or the people from Marea Atlantica in A Coruña – all of them acting locally to have an impact globally. Because of my interest in Arabic history and literature, one encounter that was particularly special to me was the meeting with the grandson of Abd ar-Raman al-Kawakibi in Viana do Castelo. Al-Kawakibi wrote a lot about despotism and was one of the opponents of the Ottoman Empire, which eventually poisoned him. We met his grandson, Salam Al-Kawakibi, who is the director of the Arab Centre for Research and Policy Studies in Paris, at a conference. We spoke to him after the conference, talking about the situation in Syria. He was clearly in pain and we could not do anything but listen to him, you know, there’s nothing to say, there’s really nothing to say.

The meeting with Al-Kawakibi reminded me of another amazing Syrian writer, called Khaled Khalifa. Khalifa recently gave a speech in Venice where he said something I liked a lot: I feel closer to Syria when in Venice, because we are also on the Mediterranean. I really like this, because I always felt a strong connection with the Mediterranean. I do believe that there is a Mediterranean identity. To me, this very much about emotional things, I cannot really explain it with logic. When I’m close to the Mediterranean Sea, I feel at home, much more than in other places. Maybe it’s just a stereotype, or a construction in my mind, but I really feel that the people of the Mediterranean have really something in common. The Mediterranean was always a space of exchange. There was even a language, called Sabir, that was used in the ports of the Mediterranean, a mixture between Venetian and Genovese dialect and Arabic. It’s a mix that is a lot about trade, but it is also about the exchange of food, of people, of thoughts that has existed for a very, very long time and I don’t think you can erase it. There is this a lot of Islamophobia today, but in the end, we have so many things in common, from the food we eat, to the architecture we inhabit. I really think that it’s something that was built throughout centuries and not something that we can just forget about.